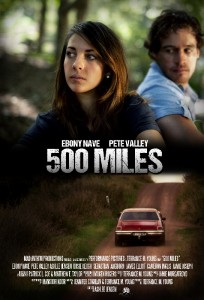 Australian independent drama/love story film, shot on a shoe-string budget which has won many awards including ‘Best Narrative Feature Film’ at the Cincinnati Film Festival is released now on DVD and VOD in Australia and New Zealand and in the rest of the World on 20th January.

A very memorable moment in the film is a scene where the male lead (Pete Valley) sings ‘”I’m Gonna Be (500 Miles)’ to the lead female (Ebony Nave).