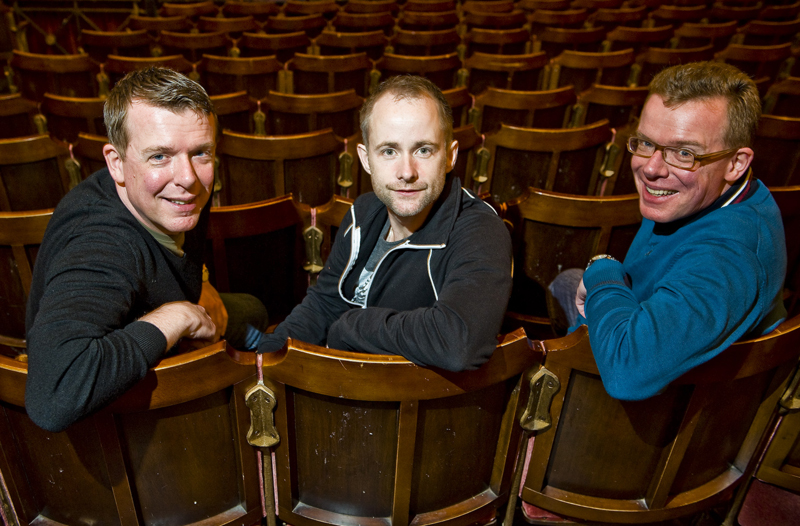 Craig and Charlie got together with Billy Boyd when the Sunshine On Leith musical visited Edinburgh and you can read their joint interview here..

Interview – The Proclaimers and Billy Boyd

The shoulders of the muscle-bound, shaven-headed guy sitting in front of me in the theatre begin to shake. Before Jean — Ann Louise’s character — has even sung the words, “While the Chief puts Sunshine on Leith, I’ll thank him for his work,” he is sobbing uncontrollably. His tear-stained partner produces a man-size box of tissues. Soon,
though, their tears — like Jean’s — are drying.

In fact, there has probably been a run on Kleenex in the neighbourhoodsince this is the opening night of the rip-roaring, sell-out success that is Sunshine on Leith, the life-affirming, award-winning musical built around the songs of The Proclaimers, the identical twins who have been described as the “poets of postmodern Scotland.”

When I tell the duo — Craig and Charlie Reid, who brought a punk
aesthetic to pop-folk almost 30 years ago — this story, which perfectly sums up how this thoughtful, heartfelt show can make strong men weak, Charlie jokes: “Aye, well, he was probably a Hibbie. We’ve got a lot to greet about,” a reference to the brothers’ beloved Hibernian football club, whose fans long ago adopted the song as their anthem.

But then the twins confess that they both saw the show, which tells of two squaddies trying to rebuild their lives after returning home from Afghanistan, last night and Craig confides: “I welled up; I definitely had a lump in my throat because I think we realised for the first time how universal the story is; it’s a real family drama that people everywhere will identify with, whether they live in Scotland, England, Wales or Ireland — anywhere in the world.”

“I think it appeals to different generations, too, because it tells of life, love, loss and regret. It’s happy/sad like our music, I guess. I kept thinking, ‘Hey, they’re playing our songs.’

“Hearing your own songs sung by other people was the most surreal experience I’d ever had when I saw the original Dundee Rep production in 2008. It was almost disturbing, because neither of us has been involved in creating the show; it’s not the ‘story’ of The
Proclaimers.”

“Neither of us has ever been into musicals anyway. But now, with this new production, with a terrific 15-strong ensemble, it was even more emotional, thinking about writing songs, such as Misty Blue or Letter From America, and how brilliantly the playwright Stephen Greenhorn has used them to tell the story he’s written. They’re not just tacked on the way they are in so many jukebox, tribute musicals, which shall remain nameless.”

“Like Mamma Mia!” interjects Charlie. “Abba’s music is so complex, they’re superb musicians, who crafted clever, original material, but the musical is so simplistic. It’s a shame because they wrote popular songs that mean a lot to people.”

Of course, many of the powerful classics written by the twins, now 48-years-old and currently working on a new album for 2011, are also indelibly woven into the fabric of ordinary people’s lives. “Especially for weddings and funerals!” exclaims Craig.

“And that’s why they work so well in the show, because of the way Stephen, who is a cracking writer, uses them.” interjects Glasgow-born Hollywood actor Billy Boyd, who is perhaps best known for his role as Pippin in the Lord of the Rings trilogy, and who plays squaddie Davy Henshall in the musical. “You’d need a scene to last 15 minutes in a straight play to explain a storyline, sometimes, but with a three-minute song you get right to the heart and soul of it.

“I love The Proclaimers’ music and have always been a big fan. I also like musicals, especially when they are well done. But it was only when I started to learn the songs, accompanying myself on guitar, that I realised why they occupy a special place in so many people’s lives, because the music has so much truth and integrity,” says Billy over coffee with Craig and Charlie.

When he is not filming in Los Angeles, Billy (42) has his own band, Beecake, and they released a new album, Soul Swinging, this summer. However, he sighs: “If only I could write songs half as good as The Proclaimers, great songs, with a political edge, like What Do You Do? (When Democracy Fails You).”

The brothers, who joke that they won fame despite being “skinny, speccy geeks in pullovers,” who couldn’t have cared less that they looked uncool and unfashionable, have legions of fans including Little Britain’s Matt Lucas, who wrote the sleevenotes for their 2002 Best Of album.

Erstwhile Doctor Who, David Tennant named The Proclaimers as his favourite band on Desert Island Discs, choosing Over and Done With, that poignant mini-drama of a song that also jerks more than a few tears in Sunshine on Leith. As does the iconic I’m Gonna Be (500 Miles), the Tartan Army’s theme tune since 1993.

More surprisingly to Craig and Charlie, it’s also featured on the soundtrack of the Johnny Depp movie Benny and Joon and, in 2007, made No I in the UK charts, after being hilariously “covered” by Peter Kay and Matt Lucas for Comic Relief.

Recently, at the Delhi handover of the Commonwealth Games to Glasgow, where they will be staged in 2014, what music did they play? I’m Gonna Be (500 MIles). “That song has just got bigger and bigger,” says Craig. “It’s like its run away from us; it’s got legs, although I’m not knocking it, it’s made us a lot of money.”

Charlie adds: “But I tell you I can write my obituary now — the first two lines will refer to Sunshine on Leith and 500 Miles, whatever we do for the rest of our lives.”

“Hey, it could be worse! I’ll always be a Hobbit — that’ll be my obituary,” laughs Boyd.

Did the twins ever fancy taking on the roles of Davy and his soldier mate, Ali, in the show? “We’re musicians not actors. And nobody asked us anyway,” laughs Craig, while Charlie interrupts: “In any case, we couldn’t interpret our songs the way the performers do in the show. They are such good actors, they really inhabit their roles and the songs, as they say in the [italics]theatah[end italics].”

Nonetheless, Billy Elliot made it to Broadway and Sunshine on Leith does have a Hollywood actor on board — Billy has three movies due out soon, in which he stars alongside the likes of Lauren Bacall, Alfred Molina and William Hurt, and is making another two films in the States next year. So do the brothers ever dream about the musical opening on the Great White Way?

“We’re just thrilled it’s going to Northampton, not to mention Southampton, Aberdeen, Dartford, Windsor and Darlington,” replies Charlie. “That means a lot to us. It really touches us when people say how much they love the show and our songs, and when some people speak of it in the same breath as Blood Brothers, well, we couldn’t be more pleased and flattered.”