The Proclaimers release their 10th studio album on April 27th ‘Let’s Hear It For The Dogs’ (Cooking Vinyl). 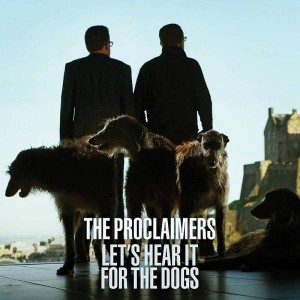 Craig Reid “It was a joy working with Dave, he understood what the songs were about and let the band describe them. Also one of the funniest people we’ve ever met.”

Charlie Reid “We had loved the work he’d done with the Manics and thought the Johnson & Daltrey record was brilliantly produced. The recording was a great experience; everything went more smoothly than any other we’ve made. It was great to be back at Rockfield. The band all played beautifully and we’re really proud of the album and hope that people enjoy it too.”

Dave Eringa “I knew when I produced The Proclaimers that the songs would be great but even then I was shocked by the sheer quality both lyrically & musically of the material & the breadth of styles they covered. The band were amazing from beginning to end & I can honestly say it was the easiest path to an astounding result that I’ve ever been lucky enough to tread!”